I didn't quite know what to expect going into this race. Most of the course was new to me since I had only run the half marathon last year. More importantly, however, was the fact that I hadn't gone on a run of more than 13.5 miles since October 1st. (That was over 5 months ago!) If you take a look at any marathon training plan I'm pretty sure it won't say "Run 100 miles. Spend 5 weeks running 20 miles a week. Run 50 miles. Spend 5 months running about 25 miles/week. Do not taper. Run a marathon. With almost 5,000 ft of vertical. In the snow."

I did have a 55 mile week of running about 4 weeks ago. I was hoping those back-to-back runs gave me a bit of stamina. And 2 weeks ago I managed to run 9,000+ ft of vertical in a week, which was probably too close to the race to help too much and, in fact, might have led to some lingering soreness in my legs. But I knew the Salida marathon would have a fair amount of vertical-- 4,793 ft according to my GPS-- and I wanted some practice.

Whatever. Excuses, excuses. This race was about training. It was about forcing me to run longer than I ever have this early in the season. It was about pushing myself. And pushed I was!

My pre-race rituals the morning of the race were strangely comforting-- almost nostalgic. I know it sounds silly, but applying BlodyGlide can be an emotional experience! Filling up my flasks with gel, stuffing my pockets with salt tablets, putting on my running vest... All these activities brought a smile to my face and evoked memories of past races. Even though I knew the next 5 hours were going to be tough, I was excited to be at the starting line. The weather was beautiful and provided reassurance that maybe winter in Leadville might actually end sometime in the next couple of months. 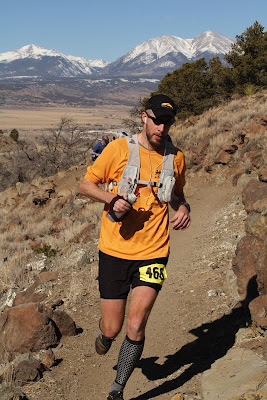 What can I say? Unsurprisingly the first 13.1 miles of the race went beautifully. I was definitely in shape to run a strong half marathon. Too bad that wasn't the race I had entered! I was especially proud to be able to run a stretch of ~3 miles with 500 ft of elevation gain per mile. I was passing people, slowly reeling them in, as we ascended to the halfway point of the race. I joked that if there's one thing that running in Leadville teaches you it's how to grind up a high-elevation dirt road at a 12:30 minute/mile pace! Nutrition was going well. I was able to eat a fairly big breakfast despite my usual pre-race jitters, and I was eating gels regularly and drinking Nuun and Gatorade for electrolytes. Throughout the entire race I felt my aid station management was perfect-- I was always in and out in less than 30 seconds. Shortly after the turnaround we hit the snow and mud. I knew there would be some of this, but I was caught off guard by how much-- at least 7 miles, by my calculations. It would've been easier if the snow had been more consistent and packed, but it was a slushy, muddy mess. It just sucked the energy out of me. A few folks started passing me. Reviewing my GPS data after the race, I actually managed to maintain a relatively good pace despite the conditions up until about mile 18, but then I had no energy left for the downhills. Miles 18-24 were the low point. Many folks passed me in this section. I had run this section the year before during the half marathon and I knew it wouldn't be easy this late in the race. More snow, more mud, and the terrain is pretty technical at times-- lots of rocks and sections that are too steep to run safely. I was slogging through it as best I could, but it wasn't pretty. No serious pain, though. The hamstrings were tight, but I expected that. I felt a tiny bit of IT band pain, but nothing serious. I was a little hungry at times, but I fought it off with more gel. No, I was just tired. This was way longer than I had run in a long, long time. The scenery was beautiful and my mental state never got too low, but I was certainly shaking my head and wondering where all my energy went. It's pretty humbling when you lose the ability to run the flats and gentle uphills and even your downhill pace is only a minute/mile faster than you ran the same section uphill 24 some odd miles earlier!

The finish line was a welcome sight. 5 hours and 34 minutes. Wow. I was hoping for 5 hours. Ah, well. So it goes. I can't say I'm too disappointed. I figure the snow/slush/mud maybe slowed me about 13 minutes. And the rest was due to overly optimistic expectations on my part. It was great to see my wife and daughter at the finish line. I basked in the exhausted post race glow for a while and then climbed back into the car for the hour long drive up to our snowy home. It felt very satisfying to enter a 26.24 mile run into my training spreadsheet. (They get their own special background color to highlight them. Yes, I'm a geek). I'll probably only get the chance to run 10 or so runs of that distance or more during the summer. It feels great to have one under my belt already. Only seven weeks until the Collegiate Peaks 25-miler!

Posted by Andrew Reiff at 8:56 AM No comments:

I just got back from a week long business trip to Boston, where I wrapped up my training for the month of February slogging away on a treadmill at a 10% grade. How do I feel? Pretty good, I guess. I'm not following any strict training plan, but I am definitely trying to hit weekly mileage goals and I'm constantly comparing my training to last year's. It's still way too early in the year for me to get too disappointed about missing a scheduled run or not quite getting in enough miles per week. That said, I logged 40 more miles this February than last February. I also managed to run 5 10+ mile runs this month vs. 2 10+ mile runs last year. I'm also running my usual 5 mile run (the boulevard) about 5 minutes faster than I did at this time last year. So, that's reassuring and certainly evidence that there's a benefit to regular running throughout the year even if the weekly mileage hovers around only 20-25 miles a week.

However, I wanted to get in one 20 mile run in February, but that never happened. And, of course, 2012 is a leap year so I got to pad my monthly mileage by one extra day. Also, some of those miles weren't technically running miles. In January and February I usually spend a hour on the bike trainer 1-2 times a week instead of running. It depends mostly on the weather, my schedule, and my general motivation level. I count one hour on the bike trainer as a 5-mile run. This year I have a cadence sensor mounted on my bike so that my GPS can measure the distance I ride on the trainer. That has kept me honest and I can better judge how much effort I put in during my hour long ride. Last year I would just wing it and it's pretty easy to space out and slow down without noticing it (especially while watching a movie). I used the bike trainer in 2011 as well. I feel it's a great option to have while training during Leadville's winters. Peddling away on the bike trainer in a t-shirt and shorts next to the warmth of the wood stove-- while watching the windblown snow whip around outside the house-- definitely has its appeal.

I would say that February is the toughest month to train in Leadville-- at least mentally. Your "serious" training probably started in January, but by February your initial enthusiasm has probably waned a bit and the novelty of running in winter is gone. You just have to grind it out and get your miles in. Should I wear my screw-studded shoes, my micro-spikes, or my snowshoes today? Glancing at the weather conditions before your run is usually disheartening: often temperatures drop into the single digits-- especially with windchill factored in. Running at dawn is brutally cold. In March, conditions aren't that much different, but you do get a few days where you get a little taste of spring. On March weekends, trips down the Arkansas valley to BV (where it can be 20 degrees warmer and snow free) make things more palatable-- even inspiring. Even the roads in Leadville start to melt out a little bit by the end of March, and running on asphalt and dirt (instead of snow and ice) suddenly drops your times by almost a minute a mile, making you feel like a rock star.

In a way, my February training almost went too well. It'll be a challenge for me to log 150 miles in March. A week long vacation in Florida and a week long business trip to Boston gave me plenty of time to run in February. In March... I've got the Salida marathon as an excuse to log 26.2 miles and then there's my birthday-- which I generally take off to do a long run down in BV. (Is it lame to consider a 20-mile run a birthday present to yourself?) March miles won't magically happen. I'll have to be diligent and run regularly throughout the week and get at least one 10+ mile run in per week. No more two days off in a row.

Again, the emphasis for my 2012 training is the long/back-to-back run. If I get those in-- even if my total mileage isn't more than February-- I'll be happy.
Posted by Andrew Reiff at 6:49 AM No comments: