But let me start at the beginning. After a weekend spent stuffing the car full of camping gear, we set off for Moab and the Grand Canyon on April 1st. Our first stop: Fruita, CO. The kids were very well behaved and survived the car trip without too much fussing. Sierra always loves the tunnels in Glenwood Canyon. The weather was a little iffy, with dark clouds moving quickly across the sky, bringing with them the occasional shower and even some thunder. This made setting up camp a little more exciting than it needed to be. Ethan's first night camping went very well. He only tried to eat the sleeping bag once or twice. We awoke to sprinkles and threats of more rain to come. I believe we set a record for fastest time breaking camp with two little kids. Now safely ensconced in the car, we drove to downtown Fruita to enjoy a leisurely breakfast. We then proceeded to pick up our friends' truck at a nearby trail head. They were mountain biking the Kokopelli Trail from Fruita to Moab and we had volunteered to shuttle it for them. I absolutely love the drive along the Colorado River on Rt. 128 to Moab. So beautiful. It's got to be one of my all time favorite stretches of road. Soon we arrived at Sand Flats and were welcomed by our good friends, who had kindly reserved us a spot. We setup camp again under the threat of rain-- which thankfully never materialized. 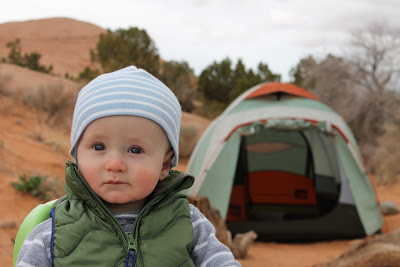 During the night I awoke to feelings of nausea. Oh, no... this is just what I had feared. A nasty stomach bug had been moving through our family the previous week. It struck Sierra first, who had to stay home from school for several days. Then it moved on to my wife, Christina, who spent most of Saturday lying in bed, vomiting, and periodically dashing to the bathroom. Despite slathering myself with Purell, and taking every precaution I could think of, now it seemed like it was my turn. The nausea passed uneventfully and I fell back to sleep, but I worried that this was just the beginning...

On Wednesday morning we packed up, said farewell, and headed off for the Grand Canyon. Despite another long day driving, the kids did great. Seeing the Grand Canyon suddenly emerge through the trees was truly breath-taking. It sneaks up on you and has quite a dramatic effect. Since night time temperatures were about 10F lower at the Grand Canyon compared to Moab, we decided it was prudent to take shelter in a hotel room for this leg of the trip. A low of 26F is a little too cold for camping with an 8-month old. We had debated this strategy for months leading up to the trip, but I think we ultimately made the right call. 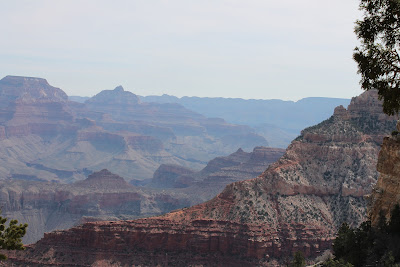 Thursday was when sh*t hit the fan.

I woke up early Thursday morning to more feelings of nausea. Then came the diarrhea. No, no, no... But, there was no denying it now. I had caught the bug. It was less than 24 hours until I planned to start my R2R2R attempt with my good friend, Alex. We had been planning this trip for months! Why me? Why now? Ugh.

For the rest of the day, while we toured around the south rim, I tried to stay positive and as well hydrated as I could. I ate yogurt in a valiant attempt to reinforce my stomach flora. I drank soda after soda after soda, trying to get some calories in me and replenish fluids. Stomach bugs can pass in 24 hours, right? Maybe there was hope... at least that's what I told myself.

Around noon I got a call from Erin, Alex's wife. They had driven from Boulder to Moab the day before and were now driving to meet us at the canyon. The news: their youngest son, Cedar, had come down with a stomach virus just as they were leaving Boulder and had been throwing up regularly ever since. The drive was epic. They weren't sure if it was wise to continue on and were wondering if there was an urgent care clinic anywhere near the canyon. There was, in fact, and they ultimately decided to press on in hopes that Cedar would soon recover.

But wait, it gets better.

Back at the hotel room, we receive a call from one of our neighbors back in Leadville that our car (which was parked on the street outside our house) has just been involved in an accident. Uh, what? Soon we receive a text message that shows a picture of a car flipped upside down on its roof in the middle of the street directly in front of our house. Apparently some guy got distracted and managed to slam directly into our little Honda Civic and flip over. Flip over? Really? Our car's rear tire, which absorbed the entire force of the impact, looks like a pretzel. I don't have time to deal with this now! I have to run 42 miles in less than 12 hours and I am destroying our poor hotel room's toilet!

I actually manage to eat a reasonable dinner before retreating to our campsite to meet Alex. After wishing us luck, the women and children head back to the hotel. I warn Alex about the current state of my GI tract, but tell him I'm willing to give it a go. He laughs and says he'll probably come down with his son's illness during the run tomorrow. (Cedar was feeling much better at this point.) We quickly organize our gear, set our alarms for 3am, and try to get some sleep.

I awake feeling... fine. A little bloated, perhaps, but okay. We set off slowly, bushwhacking to the road and then heading to South Kaibab Trailhead. After about two miles, just as we're reaching the rim, I pull off to the side of the trail and throw up. Ugh. Okay, okay... It's not like I haven't thrown up at the beginning of a race before. I feel better. What the hell. We continue. The descent is fun, but very difficult in the dark. The regularly spaced wooden steps make footing surprisingly difficult. There's a wind that's kicking up dust and obscuring our headlamps. Down, down, down we go, chatting merrily away. Even this early in the morning, it's actually quite warm. We reach the bridge over the Colorado just as dawn begins to break. I can now start to see some of my surroundings. Magnificent. We stop to refill our water bottles and stash some gear. The guests at Phantom Ranch are just waking up and getting ready for the day. We proceed up the gently graded trail, headed towards the north rim. I'm moving slowly and now that we're headed uphill I begin to feel a bit weak. I'm running, but ridiculously slowly given the terrain. I consumed plenty of calories and fluids during our descent. That shouldn't be an issue. I give myself a few miles to see how it goes. Soon I start to feel dizzy. Spacey. That clinches it. I might be able to dismiss fatigue as normal during a run, but this is decidedly more than simple fatigue. My head is swimming. I whistle to get Alex's attention and meet up with him to tell him the bad news: I'm turning around. I feel like crap. I need to summon whatever energy I can to get myself out of this damn canyon. Frustrated, but confident that turning around is my only real choice, I head back to Phantom Ranch. Alex forges ahead. My biggest regret of the trip is that we didn't get more time to spend together.

My run is over. 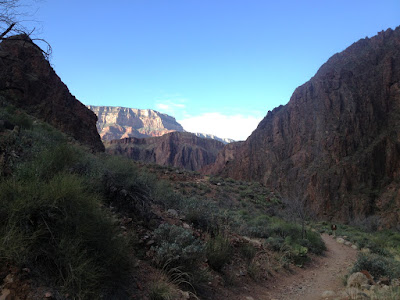 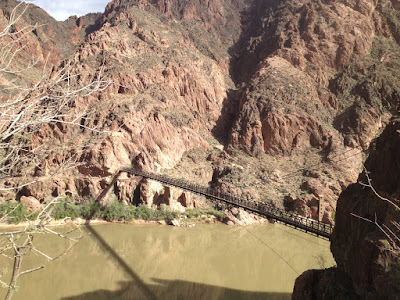 But, my death march has only just begun...

At Phantom Ranch, the pooping begins. It does not stop for 5 hours.

I try to make the best of it and enjoy the spectacular scenery, but it's difficult when I'm diving behind a rock every few switchbacks, shorts around my ankles. I am plodding up the trail as best I can, rationing my water for what I know will be an eternally long climb. I stop in every patch of shade to rest and regain my strength. Now I know how Sisyphus feels. This was not the heroic run I imagined. Ah, well... I survived. I made it to the top, hydration bladder and GI tract completely empty. It took me 9 hours to run 25 miles. DNF. 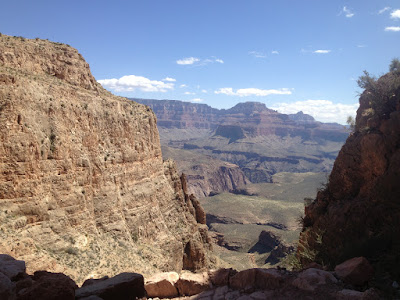 Back at the campsite, I don't feel quite as bad. I begin to take in (and actually absorb) some calories. I recount details of my glorious adventure to Christina and Erin. I play with the kids and slowly pack up camp. A few hours later, Alex finishes his fourth R2R2R.

On Saturday, we exchange good byes in the hotel parking lot and head our separate ways. We decide to make the push to Leadville in a single day, driving the southern route through Durango for some variety. It's a beautiful drive and both kids are little angels. I continue to battle a very unhappy stomach off and on during the drive. Sometime around midnight, we carry the sleeping kids past the wreckage of our car, and into our house and put them to bed. I collapse shortly thereafter, so happy to be in my own bed.

In the morning, out of curiosity, I weigh myself. I lost 8 pounds.


Despite all the difficulties we faced during the trip, overall we really did have a good time. I know that may be hard to believe, but it's true. It was exhausting at times, yes, but there were many quiet little moments of joy: Sierra playing in the sand and running, laughing across the slickrock, Ethan crawling around the tent, exploring his new world. On Monday morning at the breakfast table, Sierra exclaimed, "Papa, I want to go camping forever!" 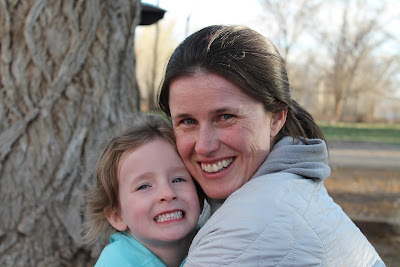 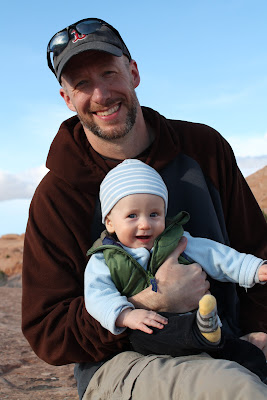